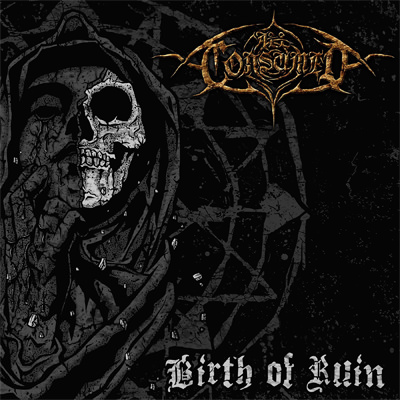 Right from first blast, there’s always been something comfortingly filthy about All Consumed, and new album, Birth Of Ruin continues this legacy perfectly. Charging in again, like early Carcass with all the pretty bits amputated, it doesn’t get much heavier than this. The Preston mob have delivered the goods, once more.

Progenitors of the (sub) genre see their earliest output blasted to rubble here, chewed up, spat out, and smashed into the coarse mortar used to build AC’s prehistoric temple to death metal. Grabbing fistfuls of primal hardcore in passing (probably to daub warning runes regarding snapped necks), they stand firmly by the root ethic of playing fast, and playing hard. Even where the pace slows to catch a groove, it just doesn’t stop. You can listen to the album over and over, but you’d be unlikely to find any slack or give whatsoever. What sets them apart from others who could be described in a similar fashion is a sort of ephemerally tangible finesse. It may be hard to reconcile that with the concept of a ‘riff propelled grenade’ attack, but it’s just the way it is. The only way to grasp it is to experience it yourself. A pack of bears charging in rage might just be cause for distraction, but you can’t deny they are awesome, magnificent creatures.

While this is more of the same thing – see No World Order and Stain Of Humanity (where Child’s Play first appeared) – some bands can simply pull that off. I mean, if it ain’t broke… why not just hunt people down and crush them with brute force? Ladies and gentlemen, All Consumed are the elite fighting Uruk-hai of UKDM. No messin’, just pure aggression! Dense and relentless. If you need to lose yourself, and stomp about to some big, fat, wall-smashing riffs, here’s perfection for you.