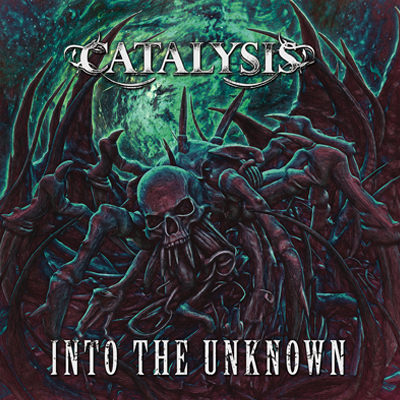 Living not far from Dundee, and familiar with the surrounding metal scene, it was always going to be hard for me to not hear the influence of Catalysis‘ roots. Flavours abound from individual contributors’ endeavours in acts such as Black Blood, Athenia, Dirty Judas and, of course, Excellent Cadaver. For those outside of that particular community, it’ll be a fair bit less obvious, but they have managed to blend all the various historical characteristics into one new machine. They also recently added guitarist Sean Ramson, who previously played for Drive By Killer and Gnostic Ruin, among many, many other bands. That should open up the creative options even further, and it will be interesting to see their future sound develop with so many strong musical personalities now in the fold.

As for Into The Unknown itself, the overall quality is an undeniable progression from the collective’s back catalogue; well thought out, and well delivered. As ever, Sam Field‘s vocal comes roaring in, a clear-yet-caustic, humanised jet engine, and guitarist Drew Cochrane‘s unabashed love of 90s metallers Machine Head lands some positive punches. There is also an overarching sense of  possible Scandinavian influence. It partly brings to mind old-school In Flames, but harder hitting, and with some more clever decisions in place regarding song structures and arrangements. There are also plenty of thrash/core elements to feast on, amongst pendulous stomp riffs. A satisfying aggregate of base metal components.

If I had one criticism to offer up, it would be that having seen Catalysis live a few times now, I personally feel their live energy wasn’t 100% captured on this release. The production is bright, clear, and heavy, yes, but (and this might not be the case for those first introduced to them on recording), I was left just a little hungry for that edge. All in all, however, an inspiring opening statement from Dundee’s newest presidents of metal.

Posted in Articles, Reviews and tagged Catalysis, Into The Unknown, Smashed, The Twa Tams.