The Edinburgh metal scene has had its ups and downs in recent years, not least of all with the closure of iconic venue Studio 24. Now, however, it seems to be in rude health, with a multitude of well-attended underground events taking place (see our recent Bevvy Scotland review). One of the main new homes for such events is La Belle Angele. Indeed, this November, it plays host to BOB Fest, the final all-dayer at Studio 24 last year, and one of Scotland’s longest running yearly underground events.

Founder Luke James tells us “Bob Fest started 13 years ago in our hometown of Penicuik. We were all just kids in metal bands that couldn’t get a gig. The school barred us from putting on shows due to gigs getting intense with pits/ wall of deaths so we decided to put on our own shows in our hometown. These became very well attended and this is where Bob Fest was born. It used to be a 2 day event in our town hall. I’m sure I’ve still got the first bob poster somewhere – It’s mingin’. From there it has grown every year with a few venue changes. This year is definitely the strongest lineup we have ever had.“

“In 2016 Our original venue closed its doors for the final time. Unfortunately this was 2 months before BOB 11 was to happen. Thankfully Studio 24 gave us a venue to host it and Bob Fest was reborn in the capital. BOB 12 was the final live show in Studio 24, what an unbelievable night that was! Now it has it’s new home in La Belle Angele. I have high hopes for the new home of Bob Fest. La Belle is such a cracking venue. Great stage, professional sound and lighting and super friendly staff.”

The event has just announced that the headlining slot will be taken by the new project of ex-Venom/Venom Inc drummer, Anthony Abaddon Bray. Sadly, their vocalist Roddy B passed last year. They have been working on fresh material with the new line-up, but you can hear their last EP, Flowers Of Evil, over on Spotify in full. New music from one of the icons of the genre? We doubt this addition could have been much more metal!

Also joining the bill, and fueled by a new 2018 line-up, backwoods death-thrash-sludge cult, Threshold Sicks have been getting their live chops back up to scratch at two other shows this year; Smashed Fest in Perth, and supporting Virus in Edinburgh. This keeps them fresh on the gigging front, while they continue work on the re-making of their 2nd album, Beat Unmerciful.

“Rough and raw, just one concussive head-butt after another with some rapid kidney punches thrown in for good measure.”

Luke is positively bursting about the bill, as he enthuses; “We are over the moon that Abaddon will be closing the night. Such a legendary dude from his days in Venom to his new solo work. We look forward to hearing the band’s new material. The whole lineup is killer this year! For me, It’s great to book Threshold Sicks back on Bob Fest. They played Bob 6 when it was open air. The local paper did a story on Bob and it had their ex singer Phil Malloch blowing fire on stage. That definitely made some Penicuik grannies shite their breeks!”

They join Dog Tired, Forgotten Remains, King Witch, Perpetua, Iron Altar, Flat Iron, Tombstone Crow, and Hammer for a monstrous feast of riff insanity, followed by the infamous Keep It Steel club night. The energy is high, and this promises to be a pulverizing show from start to finish.

Luke closes in full flow, throwing out an open greeting to all. “Bob Fest has always been renowned for it’s friendly, welcoming atmosphere. There’s a reason its been running for 13 years. It’s too much fun to not do it every year! I know people who have attended for 13 years and book the date off before any other holidays. It has became the annual tradition for them – The Bob Fest annual holiday/ steam fest. Some of the members of bands playing experienced their first ever metal show at a Bob. I’ve seen young dads bring their children as a right of passage to Bob Fest, following in their footsteps when they were young. I’ve also seen a man store a keg of beer in a tree whilst attending Bob Fest. Periodically going out to his tree between bands for drinks throughout the day. Those were the Penicuik days, but the ethos lives on in our new home in the capital.”

“A lineup of 10 killer bands, free entry into the ultimate Edinburgh metal party at Keep It Steel, an infamous bob eating competition, much rejoicing. All for £10! Bob has always been about supporting the local metal scene in Scotland/ England and putting on a cracking show that both bands and fans enjoy. This year we expect Bob Fest to be the biggest it has ever been. Spread the word.” 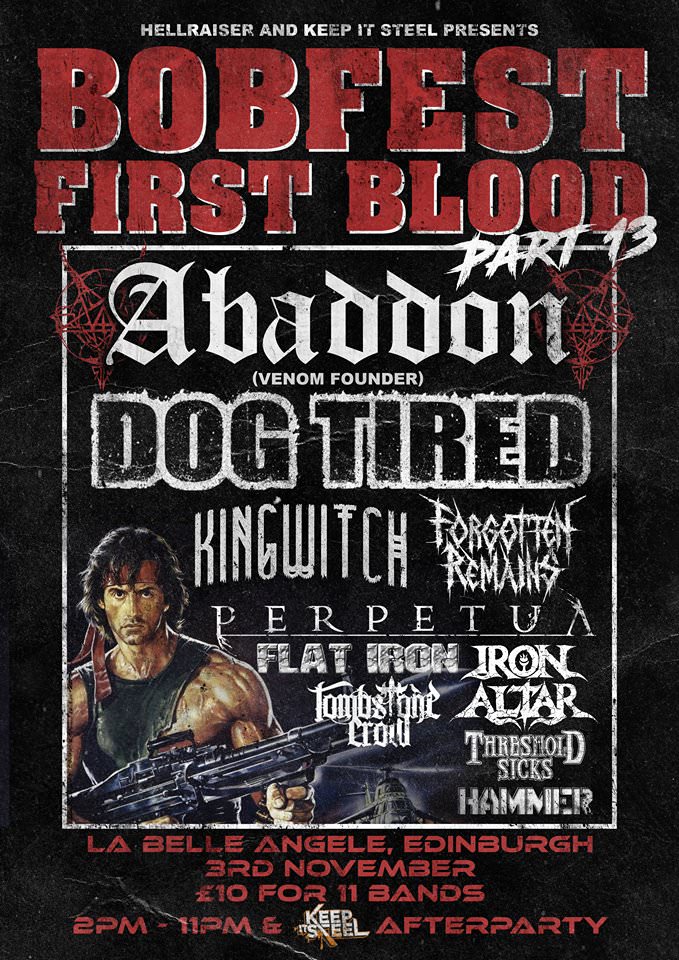