The first Dragon Fire of this solar cycle. It’s been a f***er of a year in some big ways so far, hasn’t it? Political upheaval in January. Crippling weather through February. Widespread serious health concerns from March onward. We really have had a huge reaming for months, now. Hopefully, we can look back on this one and say “In hindsight, at least it’s not as bad as 2020.” At least we still have music to get us through. Until aliens appear and declare it illegal under their new, brutal regime. You read it here first…

Talking of such difficulties, a big one for us is the current three week “lockdown” due to the coronavirus pandemic. Unfortunately, this lands right over the top of our planned Metal 2 The Masses Grand Final. While it already looked likely, and preparations were in place, this completely took the decision out of our hands. We now have the revised date of Saturday July 11th. Tickets are still available here.

Looking right back to the start of the year, however, Danish death-doom brigade, Konvent, let their debut album loose on the world. The obscenely heavy Puritan Masochism is available now from Napalm Records. Grab it now for a mountain of bleak depravity.

Of course, we could go even further back. How far? Well, an unreleased, 50 year old album, from original heavy psych rockers, Ice, is about to see the light of day! Set for a May 15th release, via Riding Easy Records (known for digging up historic gems for their Brown Acid series), The Ice Age  is said to be “akin to something like Grand Funk Railroad meets The Guess Who and The Move.” You can find out for yourself, with first single, Run To Me.

If that feels too comfortable, we have the perfect antithesis line up for you – ב :The Black Bile. Only the second album in ten years from Poles, Medico Peste, this album is the audio explanation, if you needed one, as to why  mixing random amounts of psychotropics with heavy ouija board use might not be the greatest idea. Take a trip to the Season Of Mist store to get a copy.

Evil comes in many forms, and this next one has a particularly “deathy-thrashy” feel about it. Taking old school cues from the likes of Sepultura and Kreator, North Carolina’s Krvsade are certainly a band to remind all death/thrash fans of what drew us to this type of crossover in the first place; Judgement Day is sharp, filthy, and aggressive, and there just might be a riff or two in there as well.

Back at the start of February, God Dethroned released not only this single (Book Of Lies), but their much anticipated album, Illuminati, as well. Book Of Lies is the third in a series of videos derived from the new album, its predecessors titled Illuminati and Spirit Of Beelzebub.

Bouncing in next, we have another Riding Easy band, Bus The Unknown Secretary, with Moonchild. A fun song, with many heavy nods back to old school bands, such as Sabbath and Angel Witch, while keeping a classic rock edge, this is the first proper video from their recent debut album, Never Decide, which is now over a year old!

Belgian heavy thrashers, Schizophrenia, delivered more juicy, juicy death-thrash at the end of January, with their debut EP, Voices. Here’s a superb taster of the full recording in Structure Of Death, but you can snag the full slab of this self-released beauty over at their Bandcamp or Big Cartel pages.

Here at Slow Dragon Music, we recently announced the first of our artists for Hordes X 2020. We’ve stepped things up a little for the second year of the re-branded, yearly, heavy showcase, with headliners Acid Reign, main support (and former Hordes Of Belial headliners) Solitary, the amazing Iron Altar, and our cherry-picked opening act, H8teball. Acid Reign and Solitary will also feature on the first of our Outreach shows this year at Audio in Glasgow, courtesy of Goddamned Promotions.

And speaking of Iron Altar, they have just premiered a brand new video for Cruor, on Distorted Sound Magazine. The stand-alone track was produced by Jamie Gilchrist (King Witch), with video by RJAH Films, it’s a bit of a monster, the band saying “We wanted to do a video that was more frantic, evil and intense than our first video. We transformed our jam room into our set and pulled off something that totally hit the mark.“

This week, Ukranian metal heroes, Jinjer, released a live video of Pit Of Conciousness, one of four tracks freely available from new album Macro. This long-player goes to show there is still plenty of fire in the band’s belly, as they push their sound to ever more developed boundaries. Macro is available now, from Napalm Records.

Also in the midst of the coronavirus crisis, Sacred Reich have put their positive spin out there, in the form of the live video for Salvation. Released this week, the track comes from their 2019 album, Awakening. Phil Rind (vocals/bass) said: “We want to put something positive out there right now. Salvation is about music’s ability to encourage and inspire us and bring us together.” The album is available now from Metal Blade Records.

Portland Oregon’s Gaytheist are gearing up for the release of their 5th album, How Long Have I Been On Fire. The latest step in this campaign is the release of Hornswoggled, the second single from the upcoming opus, following the track The Deep Dark, premiered earlier in the year on Brooklyn Vegan. Strange songs for strange people; stick it in your earholes.

Lancastrian death-metallers, Bloodyard, have been hard at work over the last year, getting together a much anticipated, debut studio album Orchard Of Corpses! They say “It blends crushing, heavy music with groove, and a melodic twist. It’s  diverse, and it is heavy. From the thrashier styles of Blood Begets Blood, to the death metal stylings of Rupture The Mask – this is a complete metal album.”

Glasgow’s Mad Black may be a new project, but it’s members are no novices. Drawing personnel from Dominicide and Man Must Die, it seems a previous incarnation took place under the name Visor. With their new Heave EP on the way, they’re already onto second video Feed The Disease (see below), closely following Survivor’s Guilt. Describing the sound as alt metal/hardcore influenced by “bands like The Cure, Nine Inch Nails, and Depeche Mode“, they are definitely serving up something refreshing.

Today, Carach Angren release their new album Franckensteina Strataemontanus, on Season Of Mist. The Dutch masters of horror metal have already unleashed a video for the track Monster, and say it  “will give you a grim insight in the overall story that is about to unfold. The track is set to a menacing lyric video created by Tamara Llenas featuring thehorrifying otherworldly artwork of Stefan Heilemann”

The record is available to buy now, in a variety of superb packages, including an exclusive, double gate-fold GLOW IN THE DARK vinyl, limited to 200 copies!!! That sounds worth a mention to us!

Finally, (and on the live front again), September also sees Slayfriar’s Bobby hit Edinburgh; a two day Scottish metal fest, fully in aid of Bowel Cancer UK. It’s not timid about it, either! The line-up features some of the best brutality north of the border, with Disposable, Iron Altar, Kingpin, Tempered, Black Talon, Thrashist Regime, At Their Mercy, Gay Panic Defence, Bhàs, and False Ritual. Show your support for a good cause by grabbing your tickets right here! 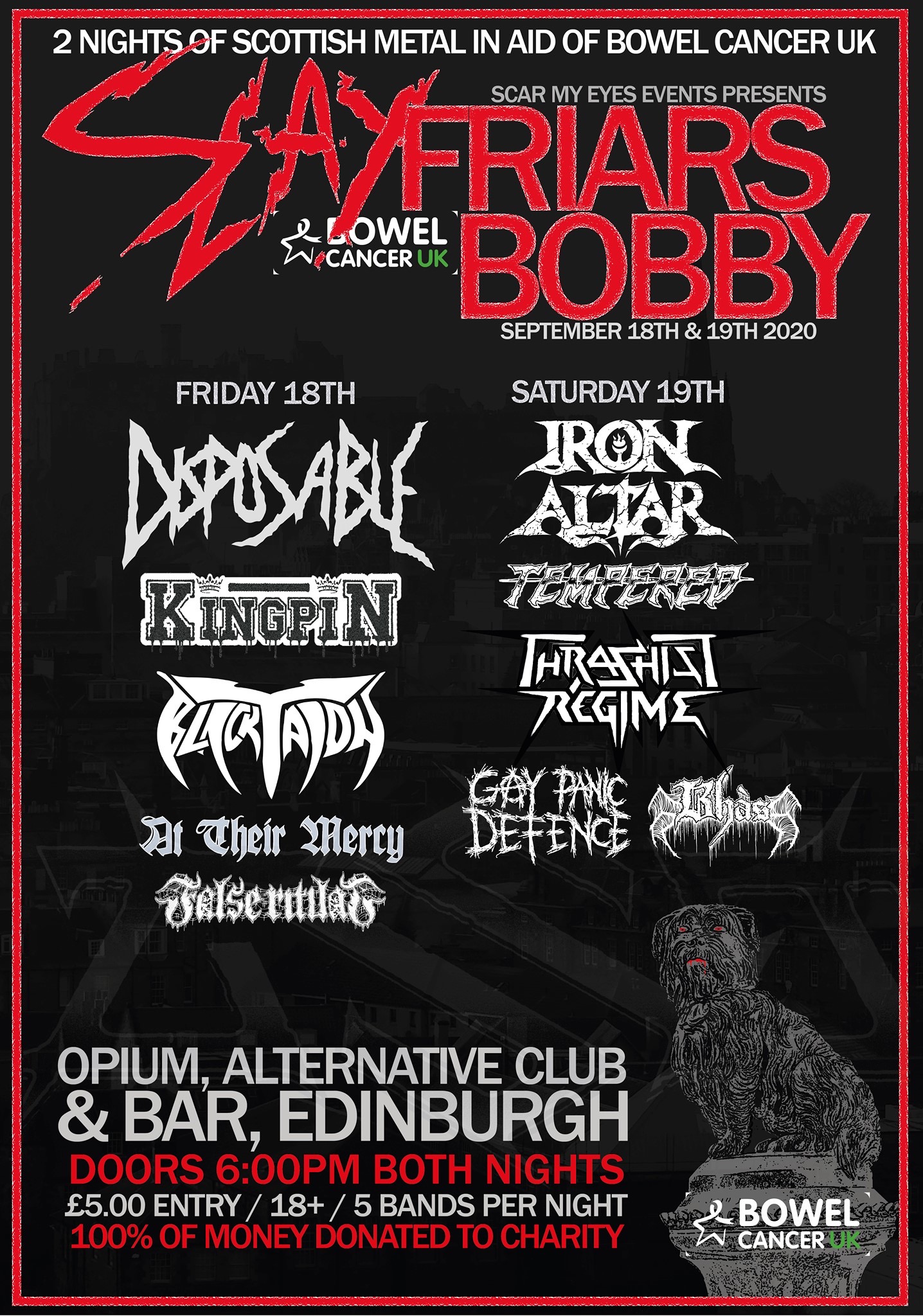