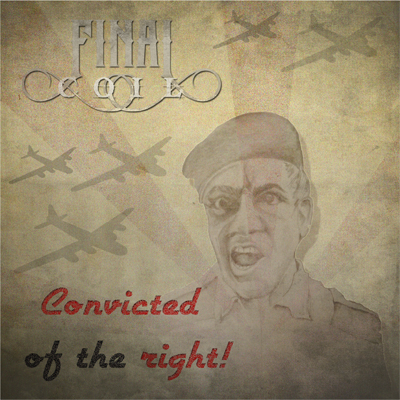 The follow up to Final Coil‘s The World We Left Behind For Others, Convicted Of The Right is an unusual beast in these times. It harks back to when grunge could sound metal, prog could sound industrial, and rock could feel just as dark and heavy as metal.

Much like last year’s full-length, the opening chords here bring to mind Tool’s Undertow, and Nine Inch Nails’ Downward Spiral. It’s quite low key, and very sombre. Later vocals are very much in the house of Alice In Chains, circa Dirt. There’s even a feel of the sad nostalgia one might get from the prettier end of early 90s Brit rock in track 3, You Waste My Time.

Indeed, Final Coil seem to be far more concerned with creating an atmosphere, than hook riffs. For my personal tastes, that isn’t as possible on an EP as it would be on an album, especially for a band who want to take you away from the general noise. If I’m honest, I really feel I might have preferred an LP to dive into. It does manage to tug at the heartstrings of youth, though, and hitting those sort of emotions so succinctly is a rare talent.

Outside of atmospheric pagan music, this is probably the least “heavy” thing I’ve listened to in a while, but it still carries a lot of weight. It’s nice to stretch the ears a bit, and Final Coil make that an easy walk. Get wired in, if you need to talk a few moments of peace.