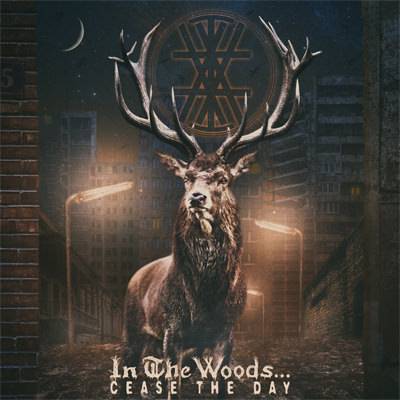 Here we have the first album in just two years from Norweigan progressive metallers, In The Woods. Before that, it was the best part of a decade since their last studio recording. However, this represents something of a small step away from last release, Pure. Stripping back the amount of heavy guitar and the metallic edge a little, Cease The Day comprises of some very gothic, ponderous stuff. Yes, the former did import similar elements, as it seems this band always has, but now they step over that point.

The will to do so has been present throughout their career, though, as can be discovered on early works such as Heart Of The Ages and Omnio, but Cease The Day has a far more natural feel in engaging the same musical idioms. So, while kind of a return to their roots, it is also a significant statement of maturity.

Although the quality rings true from the beginning, this is what some would term ‘a grower’. Familiarity, in this case, certainly does not breed contempt. While the chosen art-form doesn’t really lend itself to singalong choruses, fourth or fifth visit should have most people stuck with earworms in the melodic sections of tracks like Respect My Solitude, Still Yearning, and Empty Streets. Cloud Seeder could even be deemed (Heaven forbid) catchy! The closing title track is a simple reprisal of the opener, neatly wrapping the listener’s journey; an epilogue to their dark tale, adding a further air of developed fullness.

To me, this album could mark the first steps of a massive new phase for ITW. More dark, progressive folk, with metal influences. Where it is heavier, it seems to lean more on atmospheric black metal than the goth-death element employed in previous efforts. The result is that, more so than ever before, In The Woods sound like their name. Effortlessly haunting, this is the highest watermark of their catalogue.

Posted in Articles, Reviews and tagged Cease The Day, In The Woods, Reviews, Slow Dragon Music.