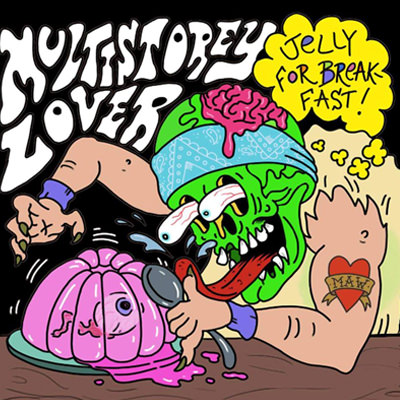 Multistorey Lover: Perth’s premiere party rock band. Jelly For Breakfast: their second release. Picking up where their 2017 demo left off, this EP carries on with the same filthy, blues drenched Americana. This is without a doubt the same band, same character, same distinctive blend. What differs the most here, is that they have matured, and developed essential breathing room. Now, instead of rampantly shagging every riff in sight, they seem comfortable to swagger into the bar and take their pick of the licks.

If you haven’t heard this squad before, just try to picture the musical progeny of a secret liaison between Tito & Tarantula and Clutch. Yup, kinda sexy. Though maybe not quite as slick. There’s an endearing goofiness hunkered down behind the backdrop, which you might not spot if you don’t know the members personally. The mismatched stumble of proto-grunge’s first attempts to match punk with old-school metal have left the lingering aroma of last night’s spilled drinks and bong-sweat.

Vocalist Kris Dye says “The 2017 Demo was recorded purely to help us get gigs and to give promoters an idea of what we sounded like. The whole thing was only recorded, mixed and mastered in one afternoon! With Jelly For Breakfast we wanted to get a better, fuller sound all round with extra attention aimed at the drum sound. Luckily, Dave at Clearwater had manned the desk for a few of our gigs, and he was able to take some of that live sound and chuck it into the studio setting.”

You really do get that the feeling that live energy was paramount in this mission. It’s a hard thing to capture, but it seems to have been achieved. This kind of (accessible?) rock isn’t heard all that often these days, least of all with the commitment, passion, and flair of MSL. There’s still some growing to do, true, but you can already feel the diesel getting hot to drag them round the next bend in the road. Bring on an album!