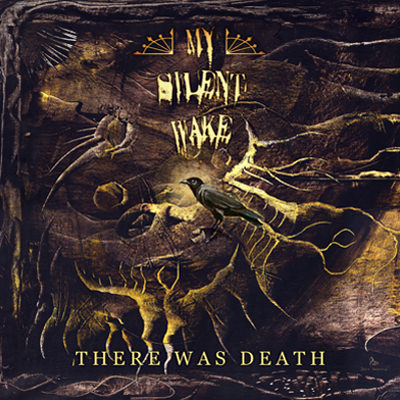 My Silent Wake have consistently divided their output between atmospheric releases and full on doom metal albums. There Was A Death absolutely falls into that second category, and it does so in masterful form. Isolate yourself, plug in, turn up, and prepare to be taken away.

Opening up with a reflection of classic horror movie soundtracks, this album just swamps you with all-but-tangible memory. The 1990s gothic metal sound is heavily referenced, mainly in nods (intentional or otherwise) to Paradise Lost, My Dying Bride, and The Gathering. There’s even a hint of Type O Negative in the dressing at times, but it is fleeting. Penultimate track No End To Sorrow, for example, bears some small resemblance to Love You To Death, with the ‘MTV’ exsanguinated and replaced with embalming fluid. Throw in some more death-metal idioms and the fully rounded character emerges from a sepulchral murk.

As standard with MSW, the sublime relationship with instrumentation helps this along nicely. That includes enormous guitars, tastefully understated keys, and richly textured vocals. They have certainly learned a thing or two about writing with, and producing, some unusual instruments throughout their 13 year existence. The extra arms grown in the process mean they have a plethora of options to hand, but they know when to use them, and, possibly more importantly, when not to. The collision of of simple and complex, considered and organic, has led to beautiful results. This album obviously wasn’t just recorded; it was crafted. More to the point, it makes gothic metal cool as f*** again! If any heavy release so far this year has earned the descriptor of  ‘epic’, it is There Was A death.