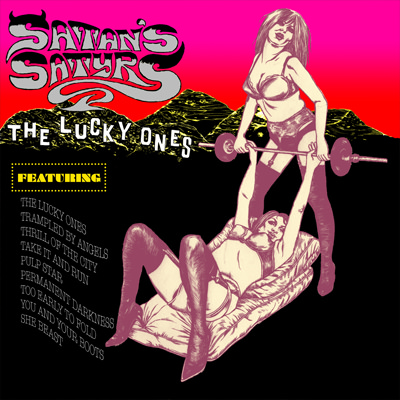 In The Lucky Ones, Virginia based Satan’s Satyrs have achieved something fantastic. They have created a piece of work which is both unique and genuinely nostalgic on many fronts. As a whole, I guess this release could possibly/probably be described as doom rock, yet it comprises of much more than that. One could equally experience the suzz buzz of 90s retro employed by the likes of Fu Manchu, or the original acid wave white noise of Jefferson Airplane. There are so many other touches; The Stooges and Thin Lizzy. Black Sabbath and Hanoi Rocks. The Rolling Stones and Bowie (no, not THAT song). It’s actually kind of remarkable that such a wide pallet hasn’t come out as just one big, brown blur.

However, it’s easy to imagine that it is a surrounding culture which holds the sound together. There’s not so much a hint at drug-fueled influences as a leap through the fourth wall into the world of Hunter S Thompson. But turned musical. And intoxicating enough it might just make you walk differently. It actually exudes a laid-back swagger, and goes beyond a listening to become an experience (complete with intended reference to Jimi Hendrix, in occasional atmosphere if not sound). The first band which springs to mind who may be comparable in such respects are Spiritual Beggars, and even they sound younger and more sober under the same cracked mirrorball lighting.

Is it punk? Is it sleaze? Is it metal? Stoner? Grunge? Glam? I don’t really know, if I’m honest. It seems to be all of these things and more. One thing I can say is, this is definitely a record which can truly claim the title of rock ‘n’ roll. If you’re planning an insane house party, catering to a wide range of strange and unusual guests, TLO would be the perfect soundtrack. Confusing to write up, but great to just listen to.