Recently, we reviewed the re-released 1998 album, Nothing Changes, from Lancastrian thrashers Solitary.  It’s always fantastic fun to look back at how long-running bands have developed in time, but a review is just a writer’s opinion. It’s much better to have the opportunity to pick the brains at the source. Between the 20th anniversary re-issue of the aforementioned album, and their headline appearance at Hordes Of Belial, we cornered main man Rich Sherrington to do just that! Obviously, the Solitary sound has changed significantly since Nothing Changes. It can be hard to assess these things from the inside. How does one perceive the difference?

Rich Sherrington: Oh, without a doubt our sound has changed over the years! To be honest it’s something that has just naturally occurred. The material on Nothing Changes was really all we were capable of writing at the time, we were definitely limited by our playing capabilities, and, I suppose, the style of metal that was popular at the time. Thrash in the mid to late 90’s was very different from the 80’s vibe, and what we hear today, and that worked for us, as it wasn’t too difficult to play. I think there’s a few songs on Requiem which were really the blue print for us to evolve into what we sound like today. In terms of how that happened, I would say that spending a couple of years playing the big four material definitely influenced The Diseased Heart of Society, coupled with the fact that best songs on Requiem had more in common with Slayer than anything we’d written before.

SDM: Were there any definitive decisions to alter the writing process since NC, or has it simply been a case of, as you say, natural development?

RS: We’ve always striven* to better ourselves. We made the conscious effort after Nothing Changes to become more extreme and I believe we achieved that. Writing wise we have followed the same process really, whereby we’ll come up with a riff, which then evolves into a song with no lyrics, then I have (to) try and find something that fits over it, whilst ensuring it sounds good.

SDM: Thrash as a genre has obviously evolved over the last 20 years, even to the point where it can be heavily debated what is and isn’t “thrash”. Who did you see as the standard bearers of the genre back then, and who do you think has taken their crown, if anyone?

RS: Really there’s only Testament who have been consistently good. As much as I love Slayer, they’ve knocked out some abysmal stuff. Nothing is as bad as the album that they put out back in 1998, and being frank, even that last album isn’t great. Testament’s worst moment was the Ritual, which was quickly rectified by Low. I have to go with Testament, as Disciples Of The Watch will be my funeral march.

SDM: It was ten years from the release of this pretty solid 1998 debut long-player before you put out another album. Why was it such a long time?

RS: Loads of reasons. We had lineup issues from 1998 to 2004, and then it took us a while to ultimately decide the direction we wanted to go in. Andy had a serious operation, and also managed to snap his arm. Plus we had a lot of debt from Nothing Changes, which had to be cleared, and we needed to find a way for the band to continue in a way which would work alongside our personal commitment. We’ve learnt the hard way. As a result, we knew that world domination wasn’t ever going to happen.

SDM: What was your main aim in the re-master/re-issue of Nothing Changes?

RS: In all honesty, we’d sold out of the 1998 and 2004 pressings, and we’ve got new fans who want to buy the whole discography. Our original intention was just to repress one of those versions. But when we realised that we didn’t have the original artwork files for either version, and therefore we’d need someone to recreate it, it got us thinking; it’s 20 years since it came out, and there’s got to be a way to make it sound better so why not make a big deal of it? We were lucky enough to get Doc Records from The Netherlands onboard as well, which kind of is the final piece in the Nothing Changes puzzle, as we’d had a deal with a Dutch Label back in 1999, but they sadly folded before the album was released.

SDM: I’ve lost track of the number of time people have claimed “thrash is dead” over the years. Solitary have survived a few of these fatalities. Do you think, the prediction will ever come true?

RS: I think it’s here to stay. Let’s face it, everyone since 1986 has tried to write an album as good as “Reign in Blood”, and I can’t see that changing. People need aggression, and thrash delivers on every level. It’s not far off 40 years old as a genre, so it’s touched a lot of generations already, and will continue to do so.

SDM: Having promised to thrash forever, can you tell me what future plans are on the cards for Solitary?

RS: Exactly that! We have a trip to Holland after Hordes, and then a couple of headline shows in November before we do London with Lawnmower Deth, Xentrix and Re-Aminator. Then we are going take a break from playing live to finish writing the follow up to “The Diseased Heart of Society”. We hope to get that recorded and released in 2019 to mark our 25th anniversary. Simon Efemey (Paradise Lost, Napalm Death, Crowbar, and many more) is going to produce the album again, but this time around he wants to be involved from the start.

SDM: I have one more final question for you, intended to be very open; any last words?

RS: Yeah, we are really looking forward to Hordes, and it’s an honour to be closing the bill. I have a special affinity for* Scotland. My Grandparents moved to a small village in the South West in the late eighties, and I spent many of my school holidays fishing on the lochs,  with a thrash soundtrack on my Sony Walkman. In fact, I even imitated playing a few songs with an air guitar to (the) desolate landscape, but in my mind I had hordes of headbangers in front of me, so hopefully that image will become reality on Sat 29th September 2018! 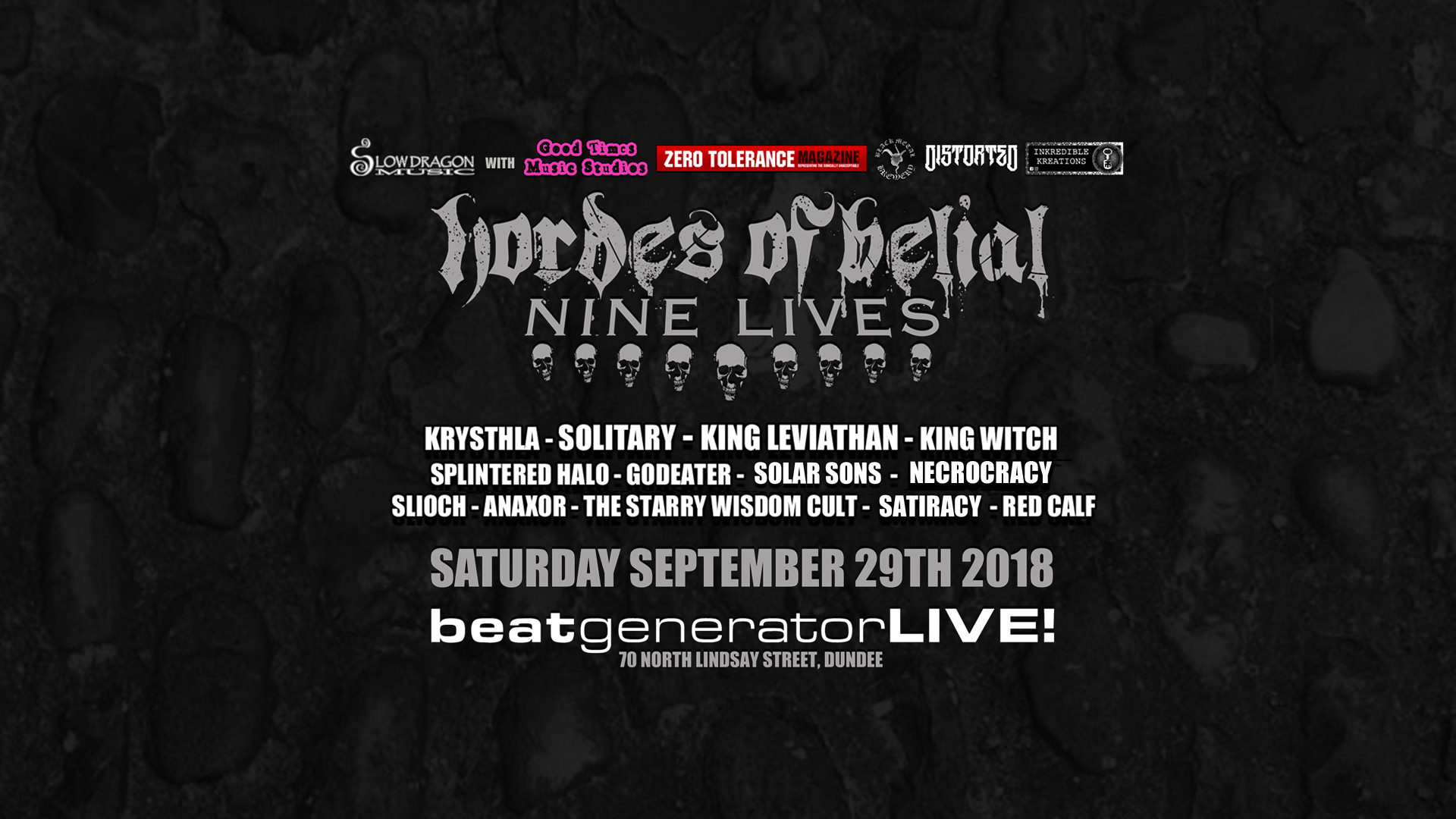 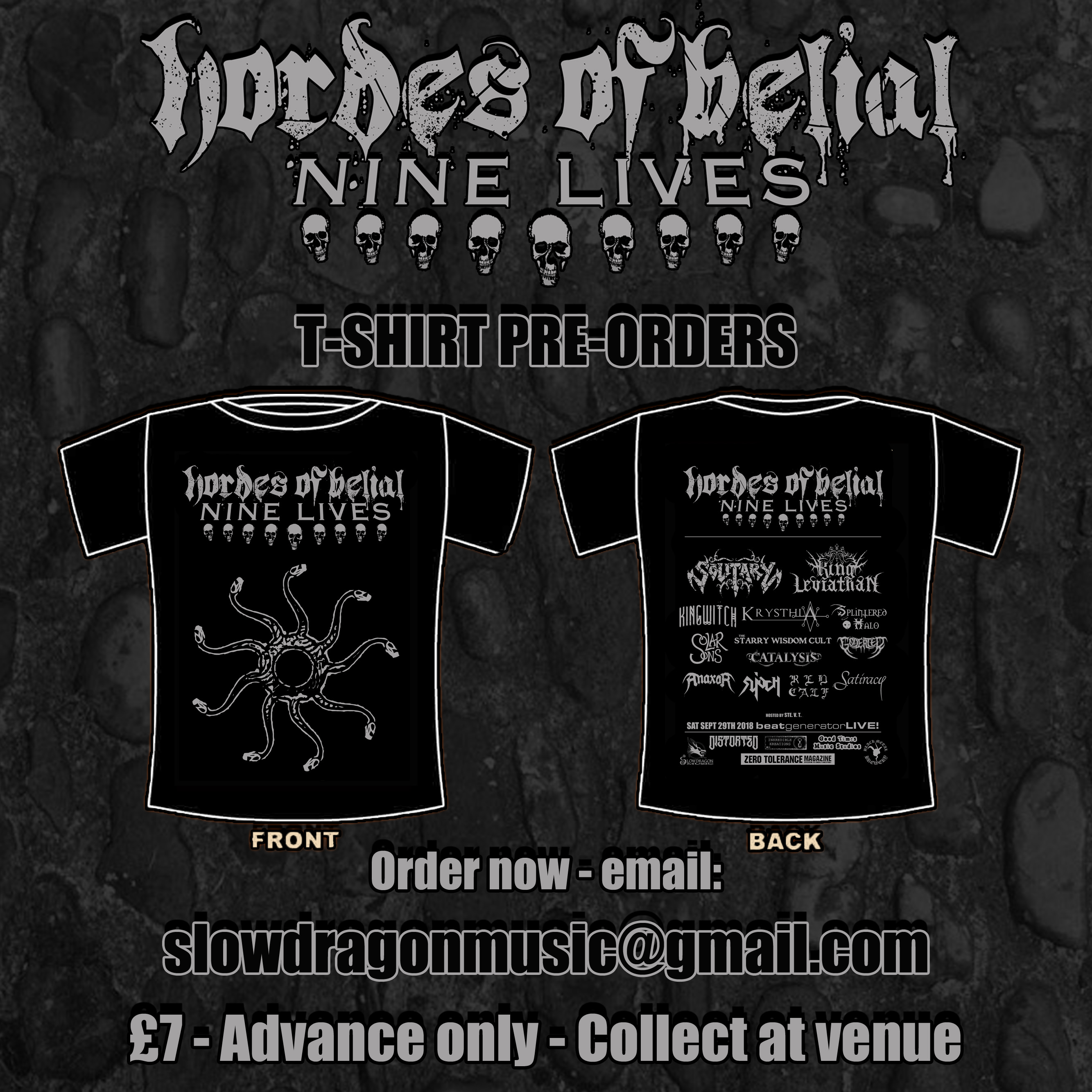